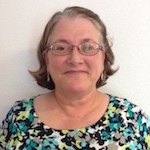 Mary Ann is a native Californian, lived out of state for many years and returned in 2012 bringing office skills obtained while working for a non-profit in Colorado. Mary Ann joined DDSO as a Program Secretary in 2014. After leaving for a short time in 2016, she returned to DDSO as part of the Accounts Payable administrative team in January of 2017.